This year, 100% of the proceeds will be going to the “C” You In The Major Leagues Foundation to give boys and girls from the ages of 4-7 years old a chance to play Tee Ball, and to provide mentoring for high school students, mainly from underserved areas of Kansas City. (To learn more about the mentoring program, click here.)

Berkley Walline was a KCC baseball player that was diagnosed with cancer during his senior year of high school. Baseball was always Berkley’s favorite sport, even as a 2-year old, when he tattooed his dad with Wiffle balls off a tee. At KCC, he was a classmate of Royals President of Baseball Operations and C You In The Major Leagues founder Dayton Moore’s oldest daughter, Ashley.

“Berks,” who died in March 2015 just a week before his 19th birthday, was a huge fan of the underdog, and he cherished any opportunity to help others. He would be honored that his memorial tournament is supporting kids through “C” You in the Major Leagues. 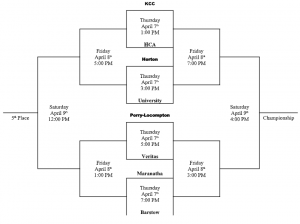 * Full Friday bracket above, but the main note: The teams that played the afternoon games on Thursday will play the night games on Friday, and vice versa.