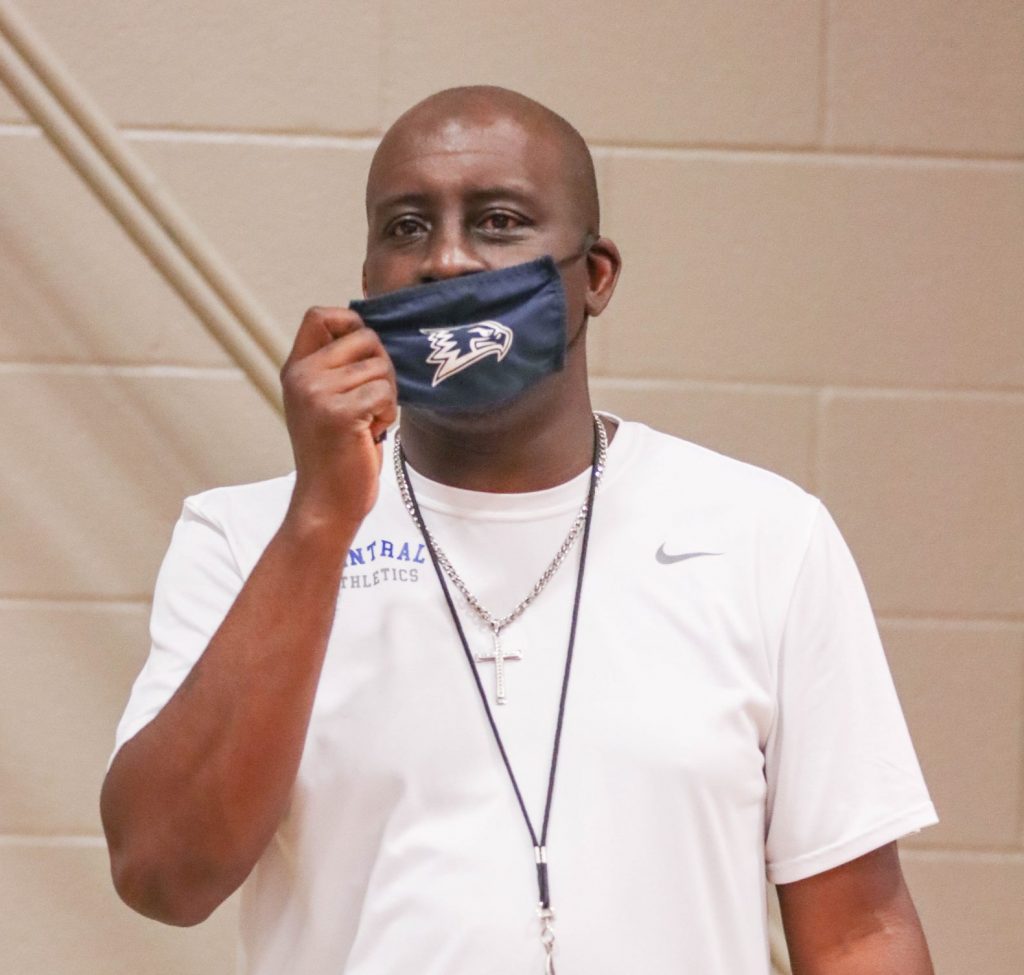 Blue Cross and Blue Shield of Kansas City (Blue KC) and the “C” You in the Major Leagues Foundation have announced Central High School girls’ basketball coach D’wan Marshall as a Blue KC Coaches with Character honoree. Marshall’s commitment to educating the younger generation in all aspects of life helps describe him as a role model throughout the Kansas City community.

Born and raised in Kansas City, Marshall has a lengthy and well-rounded coaching resume that stretches across multiple sports. For 14 years, from 2002-2016, he coached baseball in North Kansas City, this included a two-year stint as a coach at University Academy High School. Concurrently, his expertise led him to the gridiron where he coached football for 4th-6th graders at University Academy, and was also the defensive backs coach for the varsity team from 2010-2012.

However, Marshall’s passion for basketball was evident from the beginning. He coached all levels from YMCA, Boys and Girls Club, Raytown Youth Sports and the AAU circuit before his tenure on the high school level in 2010. Soon after, Marshall was named the Athletic Director at ACC Prep Ace Academy and had the honor and privilege of restoring the sports program after several seasons of absence before he took over the reins at Central High School in 2018. Marshall also started basketball programs at the elementary level at Troost, Burke and Truman through the LINC after-school program.

Over the years, across all the sports he’s coached, Marshall has seen two former players reach the minor leagues in baseball, one reach the NFL and play for the Denver Broncos, and one reach the WNBA. During his first three years at Central, one of his most proud moments was seeing 11 of his former players moving on and receiving collegiate scholarships at the next level.

“The best part about coaching at Central is the family atmosphere and that the administration understands my methods of madness and has trusted my vision,” said Marshall, the reigning Conference Coach of the Year. “They trusted my plan to move the program forward from being winless just a few years ago to playing in a district championship game only three years in. We’re just getting going, and that’s exciting to me.”

Marshall was once told, ‘don’t allow what you don’t have hinder you, but take what you do have to build you’. He’s used that advice to remind his players that there is always someone watching them and that their actions can either draw that person in, or have them flee. Don’t let a 40-character tweet/text cost you a $40,000 scholarship opportunity.

“I’m sensitive to the needs of others in a way that I read personalities and body language,” said Marshall regarding his ability to go above and beyond to help others off the court. “I’m on the lookout to see who isn’t wearing a coat and gloves in the winter and help make those needs available. I’ve driven alongside kids (to help keep them safe) who had to walk home in the dark because the rules do not allow us to personally transport kids. I look at the condition of their shoes and make sure I find a different pair and have them available to those who may not be able to acquire new ones on their own.”

Instilling strong standards in today’s youth is an important measure for Marshall because he wants that generation to be productive members of society in the future. He strongly believes that good standards will help them during their life journey and lead them to make the right decisions when no one is around to say what’s right and wrong.

“The way Coach Marshall has made an impact at Central High School, and his previous coaching stops, is a perfect example of the type of man we want representing the Kansas City community,” said Royals General Manager and “C” You in the Major Leagues Founder Dayton Moore. “To demonstrate as much passion and commitment to his players as Coach Marshall displays on a daily basis is something we should all strive toward. We couldn’t be prouder of this outstanding leader and role model and look forward to seeing the great work he completes in the years to come.”

“He’s been a father/uncle figure for the young ladies he’s coached at Central High School,” said Marshall’s nominator, Lamonte Williams. “He takes from his own pockets to feed athletes, attends their other events/activities, and even escorts athletes with no parental presence on senior nights. His strong character and selflessness are outstanding.”

“As indicated by Coach Marshall’s nominator, it takes a special, kind-hearted individual to step out of their way and go above and beyond to help the youth in our community the way Coach Marshall does,” said Blue KC Chief Communications Officer Christa Dubill. “It’s stories like this that give us all hope for the future and it’s easy to see why we’re honoring Coach Marshall as a recipient of the Blue KC Coaches with Character program.”