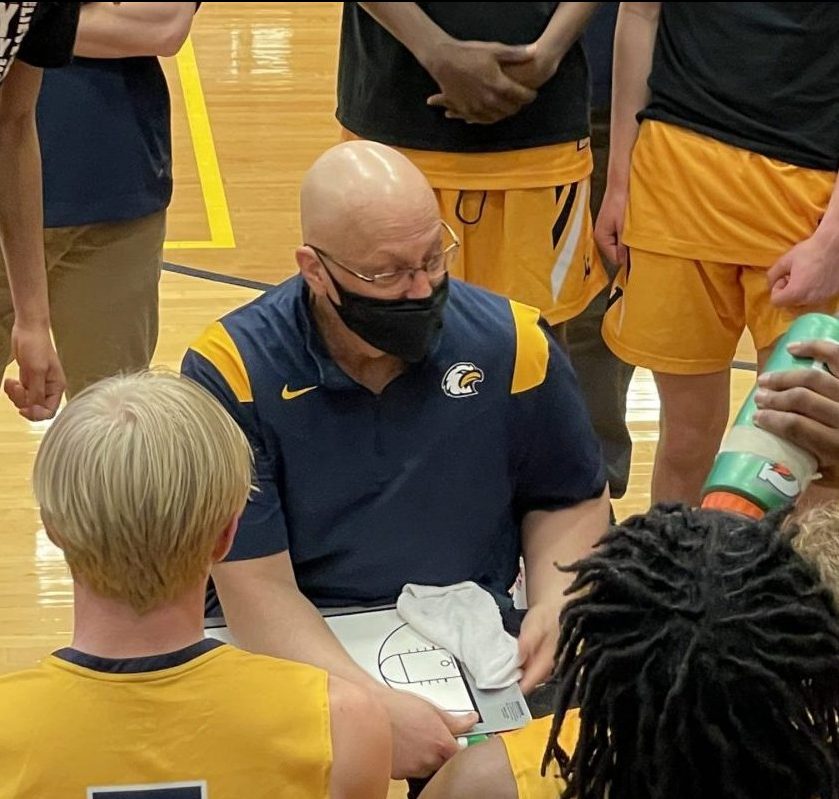 Blue Cross and Blue Shield of Kansas City (Blue KC) and the “C” You in the Major Leagues Foundation have announced Liberty North baseball and basketball coach, Rob James, as a Blue KC Coaches with Character honoree. Despite facing major health obstacles off the field in the last several years, James’ passion for coaching empowers him to make a positive impact on student-athletes within the Kansas City community.

In September 2019, James was diagnosed with undifferentiated pleomorphic sarcoma, a rare type of tissue cancer. Since then, he has had 25 radiation treatments, four major surgeries – a right buttockectomy, two debridement surgeries and the removal of a tumor from his lung – while also undergoing three different chemotherapy regimens. His cancer has since metastasized and become ‘incurable’ Stage 4 cancer.

“Almost daily something happens to me where I choose to respond by not getting angry,” said James. “I often tell myself, ‘If that’s the worst thing that happens to you today, it really hasn’t been a bad day.’ When you have been told you have incurable cancer, someone cutting you off in traffic isn’t worth getting upset over.”

James’ outlook on life and positivity toward living each day to its fullest trickles down to those he coaches. For the past 15 years, James has been coaching at the high school level. On the basketball court, he started as the boy’s junior varsity coach before becoming an assistant on the varsity squad this past season. He’s also entering his third year as a pitching coach for the Liberty North baseball team.

“Coach James is truly an inspiration for us to continue fighting and keep an optimistic and positive attitude,” said Royals President of Baseball Operations and C You in the Major Leagues Founder Dayton Moore. “While it could be so easy to quit and walk away, Rob makes it a priority to be there for his players, friends and family even in the most difficult of circumstances. We’re incredibly honored to share his story and add him to our well-deserving roster of Blue KC Coaches with Character.”

During his coaching tenure, James has built lasting relationships with his former players that extend far beyond athletics. He cherishes the moments when he’s asked to provide a letter of recommendation for those he has coached. He sees that gesture as a sign of trust between him and his players. Some of his recommendation letters have helped United States Senators, U.S. Naval Academy officers and those applying to musical theater programs and graduate school.

“The best advice I have ever received is to choose to be happy,” said James. “For years, I have told players that the two things they control are their effort and their attitude. I choose to be grateful and happy.”

James encourages his players to be their best by giving 100 percent effort, 100 percent of the time. He also pushes them to be happy and grateful for the opportunities they’re presented in athletics and wants them to think about how they GET to practice rather than they HAVE to practice.

“Standards are a huge part of what I do as a coach,” said James. “Having standards is superior to having a bunch of rules. Kids strive to reach standards, and standards serve them for the rest of their lives. A standard such as ‘be a great teammate’ goes way beyond the basketball court or baseball field.”

Throughout his battle with cancer, James has stayed committed to his players and their daily practices and game schedules. He would only miss practice on treatment days or on days where he was advised to stay away (COVID-19). As the basketball season progressed, and he began his fourth chemotherapy cycle, James still had a goal of making it to every practice and game.

“I ended up missing one game and about one practice per week,” said James. “Practice let me watch my son for 90 minutes to two hours while he was doing something he loved. Part of my desire to be there was simply to set an example for our players that they should not let obstacles stop them from doing what they needed to do. Many days I felt like I barely contributed to practice, but I hoped my presence had an impact.”

James also hopes he can be an example for others who are dealing with difficult obstacles throughout their lives. As the adage says, a coach can impact as many young people in a year as most people do in a lifetime.

“In the past year, Rob’s situation has worsened,” said James’ nominator Cy Musser. “He was told he had 12-18 months to live. Most would have stopped coaching to focus on treatment, but not Rob. He decided to fight cancer, continue to coach and be a model and inspiration. Our players watched Rob live his motto on a daily basis and learned first-hand its importance. Because of this, the growth of our team throughout the course of the year was monumental.”

“As described by Coach James’ nominator, Rob’s mindset and approach to his cancer diagnosis is inspiring and eye-opening,” said Blue KC Chief Communications Officer Christa Dubill. “His ability to continue to impact lives on a daily basis is one of the many reasons he is receiving this honor. His dedication and commitment to his players, family and friends is something we can all strive for in our own lives. We’re proud to announce Rob James as a Blue KC Coaches with Character recipient.”