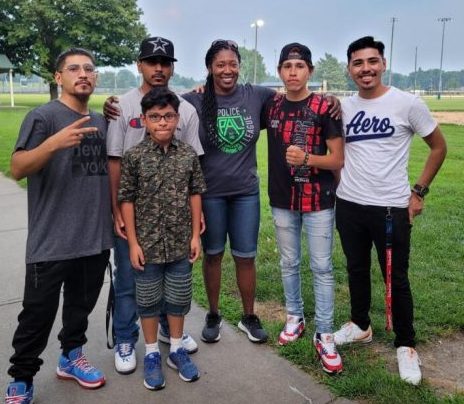 The “C” You In The Major Leagues Foundation and Blue Cross and Blue Shield of Kansas City (Blue KC) have announced local boxing coach Shawnie Nix fourth “Blue KC Coaches with Character” honoree of 2021. Nix shows perseverance and dedication on a daily basis as she helps train the younger generation throughout the Kansas City community.

Having grown up in Kansas City, Kansas, Nix graduated from Sumner Academy before moving to the Missouri side of the state line and beginning a career with the Kansas City Police Department in 2000. She has been coaching boxing at the Police Athletic League (PAL) of Kansas City since 2008, and also served a brief stint as an archery coach.

With many notable achievements on her resume, Nix’s proudest moment is still highlighted more than two decades later – she captured the National PAL Boxing Championship in 2001. Little did she know at the time, the PAL center where she hoisted a championship in front of her friends and family would soon become her new home when she began her career as a PAL officer just a few months later.

Over the years, Nix has seen a lot. But she cherishes the opportunity to watch kids grow and learn to believe in themselves.

“I’ve always said that I would never make a kid compete, but I still expect them to do their best in the gym,” said Nix. “I’ve watched kids come in who couldn’t jump rope, and by their second week they are jumping like a boxer. It’s because I wouldn’t let them quit. I would tell them that they will never learn if they quit, and that they will never win if they don’t try. You win by learning and improving.”

Nix is a firm believer that anyone can advance in life, and society, as far as they would like if they’re willing to put in the work necessary to achieve those goals. There will likely always be someone who is better than you, but it you get beat, you need to pick yourself up, work on improvements, and don’t blame anyone else.

“A PAL officer’s job is to mentor kids and to form relationships with them and their families to help build trust,” said Nix. “I try to make every family BBQ, every Quincenera, every graduation, wedding & baby shower that I’m invited to because I truly consider the kids and their families as part of my own family.”

The positive mindset Nix imposes on a regular basis is contagious to those around her. She firmly believes that most kids want structure in their lives, and instilling certain standards and expectations lets them know that someone is paying attention to them and cares. She knows school is more important than boxing and will redirect the focus of those she coaches if they’re struggling in the classroom.

“My kids know that if they need help with a subject they can bring it to me,” said Nix. “But when they’re in the gym, they know that all I expect is for them to work hard for the time they are present. I don’t do what I do for any kind of recognition. But becoming a Blue KC Coaches with Character honoree comes at a bittersweet moment as I am retiring at the end of August.”

“We’ve known Shawnie since she brought students from PAL to an event for our foundation at the stadium in 2016,” said Royals General Manager and “C” You in the Major Leagues Founder Dayton Moore. “It was obvious that night — and every time we’ve seen her with students from PAL — that she has a deep care and concern for each young athlete in PAL, as well as their families. As she retires in a couple of weeks, she’ll certainly be missed, but there’s no doubt that she’ll remain active in the lives of her former students.”

“Shawnie has dedicated her life to our community to make it a better place for youth,” said Nix’s nominator, Nancy Simons. “She is a boxing coach and helps kids learn to reach for the stars, even in rough areas. She makes sure kids have food and everything they may need. She is a blessing to them.”

“As indicated by her nominator, Shawnie dedicates her time and resources to positively impact areas that need the most help within our community,” said Blue KC Chief Communications Officer Christa Dubill. “She realizes the needs of the children she coaches go beyond the boxing ring and she never hesitates to help ensure they’re taken care of. It’s an honor to name Shawnie Nix a recipient of the Blue KC Coaches with Character program and congratulate her on an outstanding, and inspiring career.”