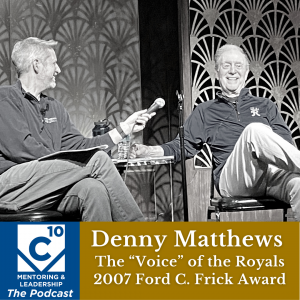 Denny Matthews has been the one consistent radio voice with the Kansas City Royals since their first year, 1969.

For his first few years in the booth, Matthews, who grew up in central Illinois, worked with the legendary Buddy Blattner.

When Blattner retired in 1974, Matthews became the “voice” of the Royals and has been the Royals’ top broadcaster ever since. From 1974 through the 1998 season – a stretch that includes some of the best seasons in the Royals’ history – Matthews teamed with Fred White. During their 25 seasons together, “Denny and Fred” became one of the most beloved broadcasting duos in Major League Baseball.

In 1999, the Royals fired White and replaced him with Ryan Lefebvre. Despite a tremendous age difference, Denny and Ryan integrated their styles well and became popular with Royals fans.

This chat with Denny, who has become a major supporter of students and families in crisis through C You In The Major Leagues, was recorded on Wednesday, March 9, 2022, at Music Theater Heritage in front of our C-10 Mentoring & Leadership students and mentors.

The C word with our C-10 students and mentors was CONFIDENCE, which, in the C You In The Major Leagues vernacular means someone who accepts constructive criticism, will try something new, has a positive attitude, and views self as a winner.

This interview with Denny focuses largely on that word Confidence and how it pertains to managers and players Denny has been around since 1969. Frankly, we do not do a dive into a lot of anecdotes from Denny’s career. This is likely a side of Denny that you have not heard before.

We lead things off with some pregame batting practice.