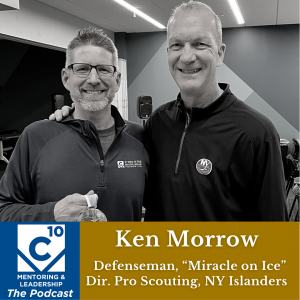 This year’s Winter Olympics may be over, but the lasting impact of something that happened in the Games 42 years ago this week is still fresh in the mind of this week’s guest. In fact, it’s still vivid for many of us.

Ken Morrow has heard the stories. Countless people could tell him today what they were doing 42 years ago this week. In fact, he gets letters and cards nearly every day.

That’s likely how it is for most anyone born in the United States before the mid-1970s or so.

Seeded seventh, just reaching the final four was going to be an accomplishment for the young U.S. team. Winning a bronze medal was nearly unthinkable. A gold medal?

As legendary broadcaster Al Michaels said so famously, “Do you believe in miracles?”

And that’s what captured the hearts of so many Americans 42 years ago.

Keep in mind, for historical perspective, to the players this was a seemingly simple hockey game between a bunch of kids, true amateurs, from the United States, beating an invincible team from the Soviet Union, a team that had won all but one Olympic hockey gold medal since 1960. In local terms, and no knock to my KU friends, but this would be like the Jayhawks beating the Kansas City Chiefs. To the rest of Americans, it meant so much more. See, this hockey game between the United States and the Soviet Union just happened to come during the Cold War, along with Russia invading Afghanistan and rising gas prices.

Morrow became the Director of Pro Scouting for the NHL’s New York Islanders in 1992.

The Islanders drafted Morrow in the fourth round (68th overall) of the 1976 NHL Draft, and he played defense for the team from 1979-1989, collecting 105 points (17 goals, 88 assists) in 550 career NHL games. He was an important member of the Islander teams that won four consecutive Stanley Cups.

The first of those came just a few months after Morrow helped the United States win gold as part of the “Miracle on Ice” team, making him the first player in NHL history to capture an Olympic Gold Medal and the Stanley Cup in the same year.

Morrow was an All-American at Bowling Green State University in Ohio, earning conference Player of the Year honors in his senior season. In four seasons at Bowling Green, Morrow recorded 126 points (34 goals, 92 assists) in 154 games.

Morrow was inducted into the U.S. Hockey Hall of Fame in 1995 and won the Lester Patrick Award for outstanding service to hockey in 1996.

Morrow visited our C-10 Mentoring & Leadership group on Wednesday, Feb. 23, at Operation Breakthrough. That’s when we recorded this episode. This episode, however, is a little different from most of our others that we do with our group. Whereas you typically hear Matt Fulks’ interview with the guest and then we delete the questions from our students, this time we’re flipping that.

The high school students in our C-10 program have been doing such an excellent job of asking questions of our past several guest speakers, and even Morrow was impressed with the questions, that we wanted to honor our students and the donors who make this program possible by using the question and answer part of the program as this episode.

That said, a few notes:

To read Part 1 of the Q&A with Ken Morrow talking about 1980 and coach Herb Brooks, click here.

To read Part 2 of the Q&A with Ken Morrow on 1980 and coach Herb Brooks, click here.