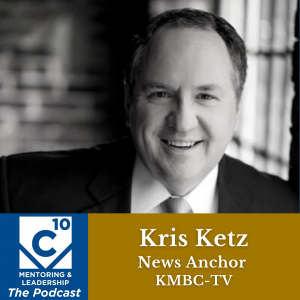 If you’ve listened this month, you know that we’re celebrating Dads here in June and, specifically, we’re talking with folks who were greatly influenced by their fathers.

This week’s guest is particularly intriguing because it can be fascinating when a son or daughter decides to follow in his or her father’s footsteps…especially when that’s in the media.

Jim King was a legendary journalist, working for the Chicago Tribune and then a couple of radio stations before eventually helping to launch WQAD-TV up in the Quad Cities area — and he had a couple of interesting stops in the middle.

For nearly 40 years, Jim King’s oldest son, Kris Ketz, has been a fixture at KMBC-TV and two of Jim’s grandsons — Kris’ sons — have followed in his footsteps…one in radio and one in TV.

In case you’re not familiar with Kris, here’s part of his credentials: he is an Emmy-award winning anchor and investigative reporter, having captured a Midwest Emmy for best anchor in 2008. He also won in 1991 for an in-depth report on the influence of the Ku Klux Klan in the Kansas City area. He was nominated for a 2003 Emmy for best anchor, and nominated for a 2011 Regional Emmy award for “general assignment reporting.” In 2015 he was one of four local news anchors chosen to interview President Barack Obama in a one-on-one interview.

Kris is a graduate of St. Ambrose University in Davenport, Iowa. He began his broadcasting career at the age of 18 as a weekend news anchor for radio station WQUA in Moline, Ill. He progressed to afternoon and morning anchor, until he became the station’s news director.

And in 1998, about a year before Jim King died unexpectedly, Kris and Jim co-anchored the Father’s Day edition of KMBC 9 News at 10.

Kris takes a swing at our Pregame Batting Practice and then discusses his dad’s legacy, following in his footsteps, and being the father of two in the media. And much more.