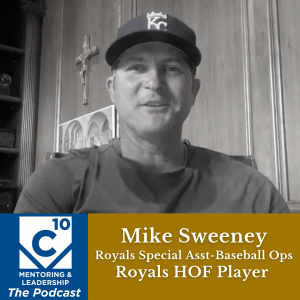 As you may know, the C-10 name of this podcast comes from the name of our leadership and mentoring program for high school students: C-10 Mentoring & Leadership. And that comes from the “C” part of “C” You In The Major Leagues. In short, at the backbone of what we do are 10 leadership traits that start with the letter “C”: Care, Character, Coach, Commitment, Comprehension, Composure, Concentration, Competitor, Confidence and Courage.

When Royals General Manager Dayton Moore and his wife Marianne launched “C” You In The Major Leagues, they did so with the idea that, although the term “C” You In The Major Leagues and the 10 “C” words began with the Royals’ player development, really all of us could benefit from doing our best to live out these 10 C words. Not to be Major League Baseball players, but to be major-league people in life. In our communities. In our roles as leaders and mentors.

With each week’s guest n this podcast, we want to focus on the “C” word that may apply to him or her the best. And since the word CHARACTER is really at the heart of the 10 “C” words — not to mention one of the 10 words — we wanted to start there.

Without question, this week’s guest embodies that word CHARACTER.

Mike Sweeney was one of the most consistent players during his long career with the Royals from 1995-2007. He was a five-time All-Star, and he’s in the top 10 for several career numbers including games played, runs scored, hits, doubles, home runs and RBIs. Not surprisingly, he was elected to the Royals Hall of Fame in 2015, his first time on the ballot.

As Dayton Moore has said, “Mike breathes life on people unlike anyone I’ve ever been around in the game. He’s extremely positive, optimistic and encouraging, which is perhaps one of the most impactful ways to motivate people — giving them hope and believing in them.” And then he added, “One of the most important aspects of leadership is to delight in where you are. Mike Sweeney does that as well as anyone I’ve ever been around.”

This week, we share part of a conversation that we had with Mike Sweeney and the students and mentors from our C-10 program. We hope you enjoy hearing Mike take a swing at our “Pregame Batting Practice” and then talking about being a man of CHARACTER throughout his career, on and off the field.