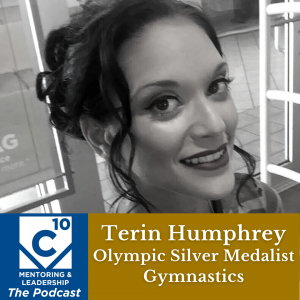 Our “C” word for this week is COMPETITOR. In the “C” You In the Major Leagues vernacular, a Competitor is someone who has a desire and ability to compete; has high expectations; is tough-minded and has the ability to overcome obstacles; and brings out the best in teammates.

This week’s guest certainly fits that. Although the Olympic Games in Tokyo are over, we wanted to bring you one more guest who’s medaled in the Olympics and definitely fits the word Competitor.

Terin Humphrey helped the U.S. gymnastics team win its first gold medal at the World Gymnastics Championships in 2003, and then won two silver medals a year later at the Olympic Games in Athens, Greece.

She then went to the University of Alabama, where she was an 11-time NCAA All-American, and won the national championship in the uneven bars in 2005 and 2007. Unfortunately, she had to retire from competitive gymnastics in 2008, during her senior year, shortly before the NCAA national meet.

She’s in the USA Gymnastics Hall of Fame, where she was inducted as part of a team in 2008, and then individually in 2015.

As if all of that’s not enough, she competed on American Ninja Warrior twice, she’s a former police officer, and she was on the selection team for USA gymnastics for the 2012 and ‘16 Olympic Games.

This interview was recorded at the end of July in front of our C-10 students and mentors at Musical Theater Heritage inside Crown Center in downtown Kansas City. As is the case with these conversations that we record in front of our students, some of the chat has been deleted to keep some of the conversation private between Terin and the students.

Before we introduced Terin that night, we showed the video of her silver medal performance on the uneven bars, and you can find that link in this week’s show notes. We open the conversation by asking Terin about the nervousness she felt before and during that routine.