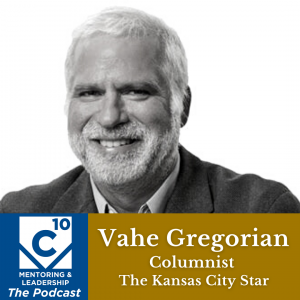 As we mentioned last week, here in June, the month of Father’s Day, we’re talking with folks who were greatly influenced by their fathers. And this week, Father’s Day week, appropriately enough, we’re chatting with Kansas City Star columnist Vahe Gregorian, whose father Vartan died in mid-April at the age of 87.

But what a life he lived. Vartan was born in Iran to Christian Armenian parents and by the time he came to the States in 1956 to attend Stanford, he spoke seven languages. We’re going to talk more about his life, but we’ll add these distinctions and honors: he taught at multiple universities, was the President at Brown, and also led the New York Public Libraries and the Carnegie Corporation of New York. While there, he helped lead an initiative with other foundations called the Partnership for Higher Education in Africa, which made grants to nine countries totaling $440 million over ten years, improving conditions for 4.1 million African students enrolled at 379 universities and colleges. Oh, and there’s this: President George W. Bush awarded him the Presidential Medal of Freedom, the nation’s highest civilian award. President Bill Clinton awarded him the National Humanities Medal, and President Barack Obama appointed him to the President’s Commission on White House Fellowships.

This will be unlike most of our podcasts but we think it’ll be a tremendous blessing as you hear about a great leader who wanted to make a difference for others.

Vahe takes a swing at our “Pregame Batting Practice,” and then he discusses the influence of his parents, particularly that of his father.

For more information about the C-10 Mentoring & Leadership program for high school students, including the application process for current high school freshmen and sophomores, visit our website.