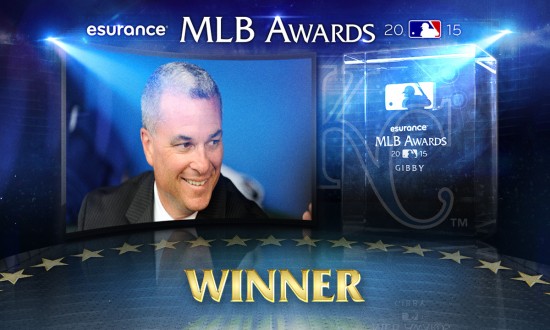 Although we’re a few days late, we need to congratulate the founder and executive director of the C You In the Major Leagues Foundation, Dayton Moore, who was selected as the 2015 winner of the Esurance MLB Award for Best Executive. The ceremony was held earlier this month during baseball’s Winter Meetings in Nashville, Tenn.

This award has been nine years in the making for Dayton and the Royals. See, for many of us, whether through blind faith or just knowing Dayton, we felt the day would come when the Kansas City Royals would get back to postseason baseball. Little could we have imagined in the summer of 2006, when he became the general manager, that the Royals would reach the World Series in two (so far) consecutive years and win the second world championship in the club’s history.

From where I’m sitting, there are three main reasons the Royals were so close to a World Series title in 2014 and then won it in 2015, and all three reasons relate to MLB’s 2015 executive of the year.

Here’s the funny thing as I look at that list: as much as those attributes apply to Dayton Moore and the Royals winning the 2015 World Series, those three keys apply to all of us, whether in our jobs, our churches, or our homes. As a husband and a father to three children, those three attributes are important for our family to be “successful.” If I’m a lousy husband and father (as I sometimes can be), and not trying to help us with these three characteristics, we won’t be as happy; we won’t be as loving; we won’t be as respectful. The same can be said if you’re the CEO of a Fortune 100 company, the night manager at a fast-food restaurant, or a youth minister at a church.

If your organization or church had an Esurance Award for Best Executive, would you be in the running for it?

(By the way, if you want to read more about Dayton Moore winning the award, you can click here.)